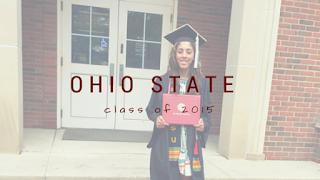 I’m a graduate of The Ohio State University. I
honestly couldn’t be more proud to have received my degree from such an amazing
school. This place has blessed me with a voice and coming into my own. I’ve
become the woman I am today because of these experiences. I made so many
friends and memories. I took five years, five years that went by too fast. One
year was spent at Kent and the last four, at my new home. The Ohio State has given
me so many opportunities to go out and find myself.

I joined clubs and it was nice – nice to hang out
with people that weren’t in my usual group. I went through a stage of going
out, after I turned twenty-one so I was late compared to everyone. I stepped
out of this shell I was hiding in. I let the real me come out and take over. I became
happy. I stepped out of this box that I felt confined to – this idea that I’m shy
and stuck-up which I’m far from. I made friends and people noticed I was
outgoing an 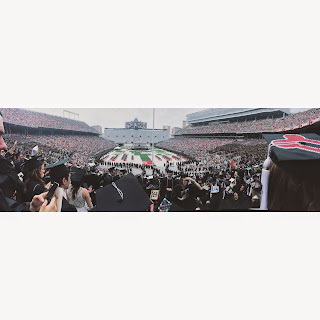 d pretty funny if I do say so. I made really good friends, best
friends even that I love to the moon and back.

I experienced the love of college football. I
experienced pride and being so involved in something with the entire community.
As a graduating senior, going out with quite a few teams that were National
Champions was the best. I will always be proud and remember those moments. I
took big road trips with my friends and I just took so many chances with the
mindset of ‘what’s there to lose?’ There are a million things to lose but I
took that chance and I regret none of it. I did things no one thought I would
do and I shocked people. I love that – coming into my own and people realizing
it.

For once, the fear of doing something was pushed
to the side. I took so many chances and they worked out in their own way. It
made me happy and feels great. I have a degree, a degree that I cried over and
wanted to give up on so many times. College is fun but it’s also hard. It was a
struggle to figure out what I wanted to do and to think about all the possible things
to do in this world. It was an adventure, an exhilarating and stressful
adventure but it was worth it. I take the pride in this degree and the fact
that I earned this and it cannot be taken away from me.