We made it to six months! Rocko is six months and will be seven months in about a week and a half. He is officially potty-trained although he thinks my fuzzy white rug is grass and has used the restroom on it three times. Other than that, he can be an angel but he can be a hot mess! I wouldn’t change it for the world, though. How can one stay mad at such a cute puppy? Those golden eyes stand out amongst his pretty brown coat and he’s quite the charmer.

Rocko still is getting used to socializing with dogs that are not part of the family—he love love loves other dogs! He wants to hang out with them all the time and it gets hard because people have misconceptions over Pit bulls and I don’t want to deal with those accusations (Yes, I’ve heard terrible stories of random strangers yelling at Pittie owners). I’m not the one; I’m a super protective doggy mom. 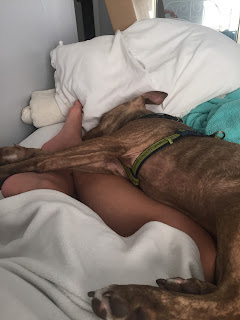 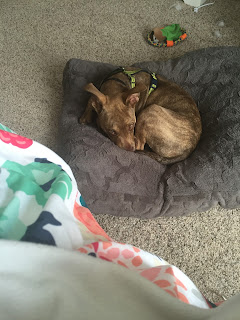 When it comes to his food, Rocko is SO picky. He has a sensitive stomach which is the norm for Pit bulls so I have to get the overpriced stuff but it works. Other than that, he has learned to beg and will sit at my feet as I eat my human food. That is probably his favorite and it doesn’t help that my dad used to give the dogs fruits like watermelon and apple slices. He was very spoiled before moving back in with me. He thinks he deserves it all but he’s mistaken. I do slip applesauce and coconut oil into his food so that he will eat it when he hasn’t eaten all day. It’s tough getting a pup to eat.

He sleeps A LOT. Obviously, he’s home alone from 9 am to 5 pm so he has all that time to sleep and chew on his bones and toys. He prefers to sleep. When I’m taking a nap after work, he’s taking a nap after work. He likes his sleep I can say that. He sleeps throughout the night, thankfully. Rocko falls asleep to Gilmore Girls every night. He also sprawls across my bed and it kills me because hello, what about me?

10,000+. He has so much energy and I know that’s because he’s a puppy and he gets too excited when he sees people. He spins in the air and loves to play. As soon as he’s done using the restroom, we’re playing tug-o-war with his leash because Rocko is crazy. I love him, though. His energy is refusing—it’s nice to be greeted when I come home with tons of kisses and hugs from my puppy. It makes me feel young and I can’t help but participate when he wants to race and be chased.

His favorite thing to do?

Chew things. Rocko loves bones and chewy toys—he’ll chew whatever I give him and that is nice for the most part. I’ve bought so many bones for this guy because he is spoiled and I need something to keep him busy. He definitely is a gnawer. Rocko will chew whatever he can get his paws on to my dismay.It can be an annoyance but it really doesn’t bother me because he hasn’t chewed anything of importance. That sounds bad but it could always be worse. He did chew the plastic ends on all my Nike sneakers, though, that was not fun and he learned to leave those alone very quickly.

The bad that’s not so bad?

Chewer. Like I stated above, he loves to chew and Rocko will chew whatever he can get his mouth on. It was worse when his adult teeth were coming in but this morning he decided to chew on one of my new tops and it was new to me. I was just sitting there like “what?!” – this had never happened so it threw me off. Nothing will be as worse as his trying to chew the wall at my old apartment and chewing the door panel at my new place. Other than that, he likes to put everyone’s arm in his mouth. He’s still nipping but it’s not as bad because he’s understanding that it’s not okay. 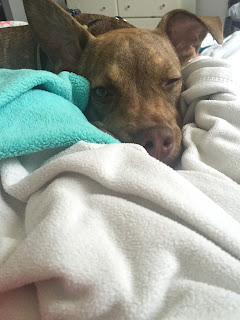 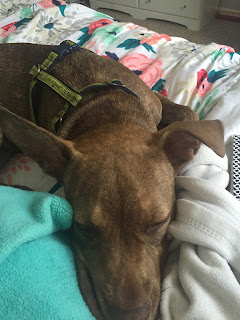 Happy 6 months to the biggest baby I know! Life would be dull without Rocko. I’ve learned to be less selfish and he makes me so happy. My heart swelled when I finally got him and I honestly can’t imagine life without him. He’s my little baby and I am in love.

You Don’t Have to Have It All Together Right Now
How’s B Doing? I’m Survivin