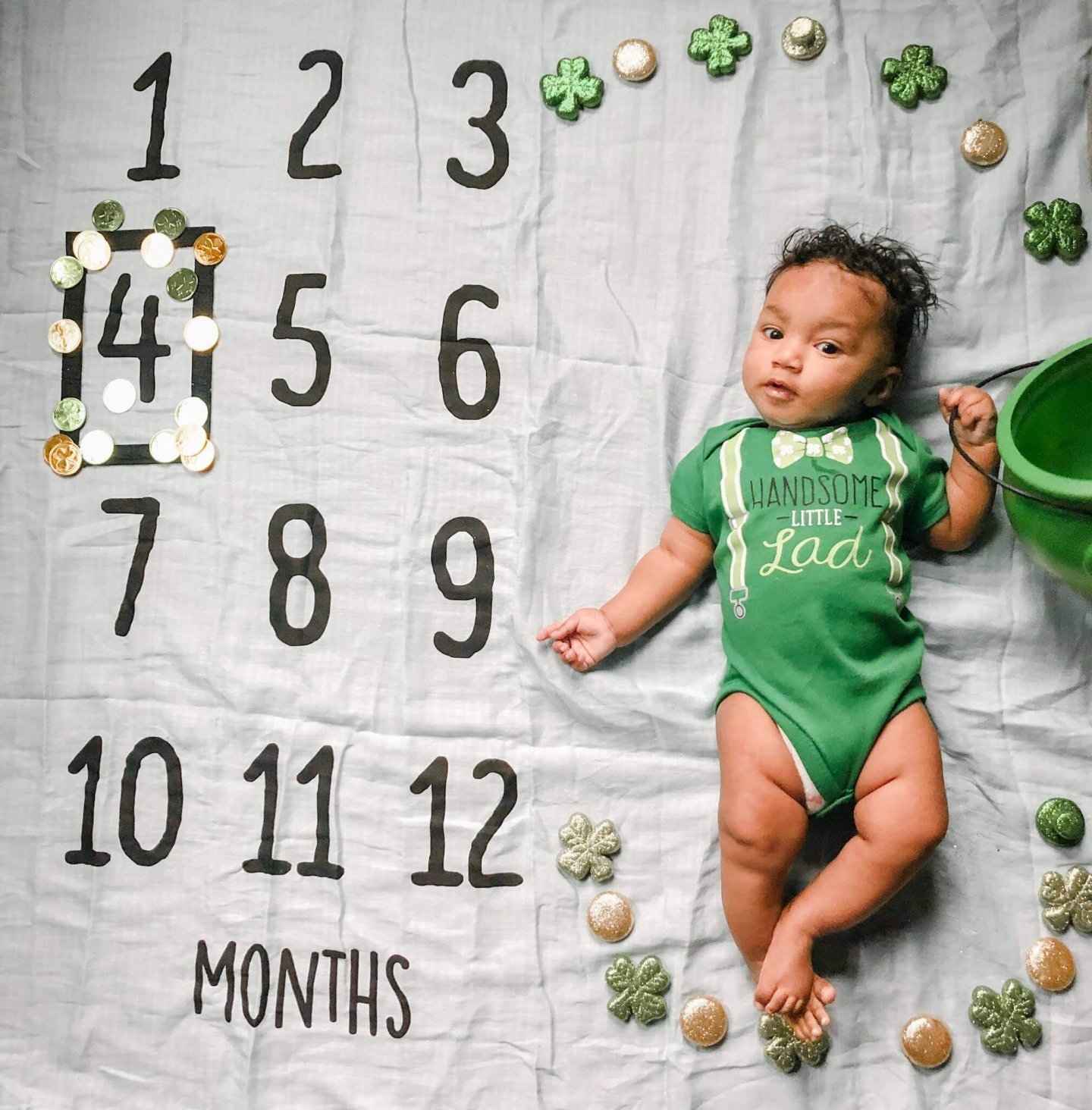 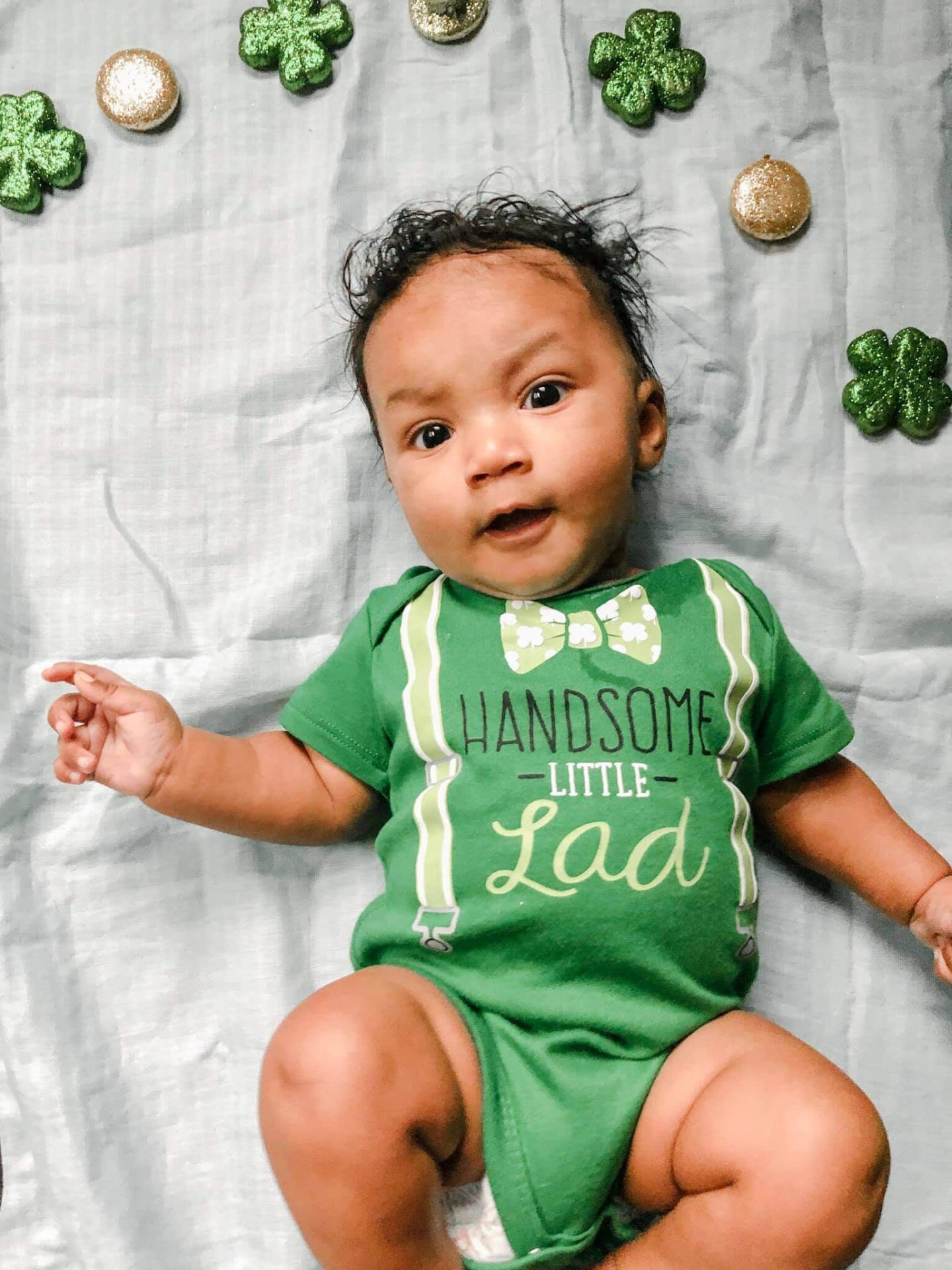 Cannon is four months which is wild! My baby is growing up and I want him to chill out on growing. It’s crazy how much they can change in what seems like a little time to me but it’s a lot to them. He’s conquering his leaps and doing his thing. I will say that he’s so much more active which is killing me. It’s not bad or anything but sometimes I just want to chill. He’s definitely like his father in that manner.

This boy is going to be a handful, I do know that. He keeps me on my toes and he’s only four (and a half months)! Cannon is screaming just to scream and getting frustrated when his toys don’t do what he wants them to do. He loves to put everything in his mouth so that’s our new fun thing that is a challenge, as well.

We have moved on to introducing toys to Cannon. He loves to chew on his fingers so we figured it was time to give him some toys. It has been a blast to watch him figure things out. Chase and I might have overdone it on the toys but he has enough chew toys to get him through teething. Rocko thinks the toys are his, as well so that’s fun. This is definitely the fun stage, in my opinion.

Cannon likes to roll. It’s really cute and funny. The feet are usually flying in the air and he just tosses himself. His chunky thighs make it very enjoyable. Bath time is still his favorite time. He loves walks! As it gets warmer, I take him out when it’s time to walk Rocko and he loves it. Cannon is a huge fan of his stroller, most of the time. I have a really good baby — knock on wood.

Cannon has started to express frustration with things. He does not like when things don’t do what he envisions them to do. Like his teething toys — he wants them to fit all up in his mouth and there’s just no way. The strong personality is already showing out. And, he does not like loud noises. He will throw a fit if he has to deal with it. Loud noises are a no-go for my little man. We learned that at his dad’s game. Also, he’s not too fond of strangers/people he hasn’t been around for some time. That’s perfectly fine with me because I don’t want him going to strangers, anyway.

I like to think that Cannon knows how to say hey. I would say that’s his monthly milestone that is unexpected. He’s a talking machine and he will talk your ear off. Sometimes, he talks me to sleep. His hands are his favorite part of his body but Cannon has figured out his feet and tries to shove them in his mouth. It’s super cute and I think it’s hilarious. Cannon can laugh! He has the cutest laugh and the things he laughs at are not really funny. Like me telling him no will get you a laugh. His favorite thing is me shouting boo at him because that’s funny to him. Totally fine with me because whenever he cries, I boo him and he’s giggling. And, Cannon took his first flight this month! He did amazing. Tons of sleeping for the majority of the flight and being curious with what is going on out the window. I’m so proud and relieved that he did well

We are going through the four-month regression at the moment. I’m talking every two hours Cannon is waking up to eat which is whatever because it’s not hard to feed him for 10 to 20 minutes and roll back to sleep. I’m just extra tired because there are times when he does not like things touching him while he’s trying to sleep so we have to rearrange the bed to accommodate this. Other than that, Cannon is still skipping his naps and making himself a little overtired. Currently, I can get a twenty-minute nap out of him which is something.

Still at it. I actually enjoy breastfeeding because it has become easy for me. I love the time that I get to hang out with Cannon even if he is just eating. It’s not an easy thing for everyone and I know that. Breastfeeding can be hard. There are times where Cannon won’t eat on one side so I have to flip him over to the other. Thanks a lot, Slacker Boob. Fortunately, I’m starting to ease up on breastfeeding in public. I breastfed on our plane to and from Atlanta with no issue. Shout out to my mom for providing cover when Cannon would have a mini-meltdown. I’m proud of myself for that achievement.