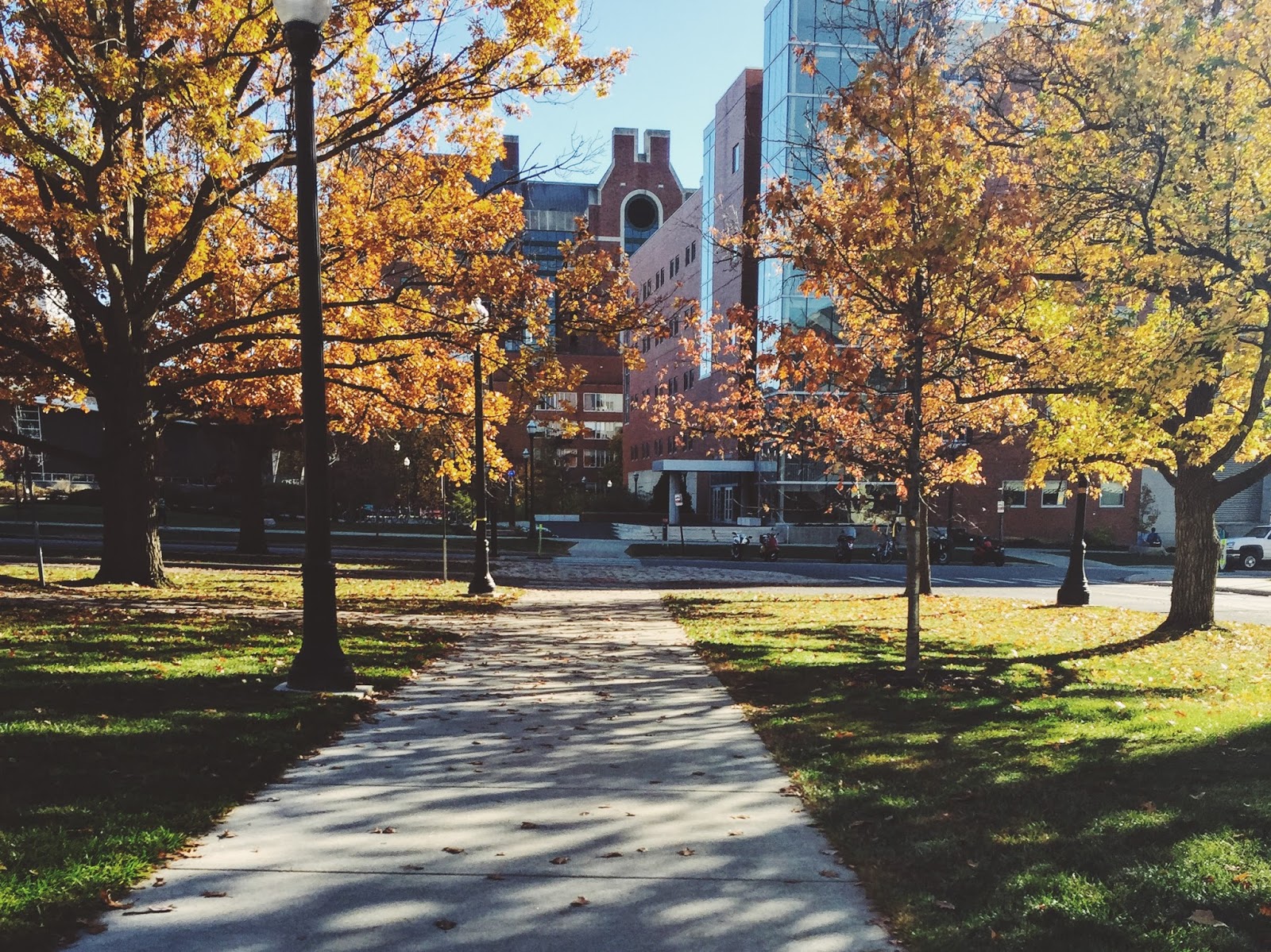 It’s Fall also known as my favorite season. I guess I wouldn’t call it my favorite season because I like Spring but I like Fall because I don’t sweat as much — thank God, I’m not in college running across campus in a hoodie for the cool morning breeze and warm afternoons because I probably wouldn’t be a big fan of Fall anymore. Nonetheless, Fall is the season where flannel and plaid makes it’s way back into our lives and hot beverages are the perfect accessory.

I tallied up a few things I would like to do during the season. I’m from a small town/suburbs right outside of Columbus so some of these things are actually really achievable. We have the pumpkin farms and places that will support my pumpkin and seasonal obsessions. I’m currently renting in a suburb outside of Columbus which is maybe thirty minutes from my hometown so I have two places to explore and live out my Fall dreams. Anyways for Fall, I made a bucket list and it’s probably one that I’m not going to complete everything because I’ll be completely honest… I like to be lazy on the weekends and I work a nine to five. I’m going to try though and if I succeed, you’ll see it on Instagram.

I’ve never been apple picking — unless Eileen wants to chime in and share a trip that I don’t remember but I’ve seen dozens of pictures on the gram and I want to go so bad. I don’t think I would be good at it but that’s what mom and dad are for, right? I would definitely drag my family because significant other is in another state and my in-state best friend has a boyfriend who she’d probably drag along. I think apple picking would be fun plus it’s has a pumpkin patch so there are two needs marked off at Lynd’s Fruit Farm.

The last time I decorated a pumpkin I carved Ariel from The Little Mermaid and my sister carved Hello Kitty — I think I was twenty years old so that was about four long years ago and I’m done to decorate again. My roommate and I are all for decorating and being seasonal so this is probably something Emma and I will do when she’s off. If we don’t carve any, Target has a great selection of painted pumpkins and I almost leave with one every time I step into that store.

Who doesn’t like to bake? If you don’t, I guess you should skip this section unless you want to give pumpkin muffins and cupcakes a chance. I plan to bake on my Saturday’s since I’ll be at puppy training on Sunday’s. I want to make so much stuff and my Pinterest boards are currently overloaded with ideas of things I think I might want to make. Expect pretty pictures on Instagram if I go through with it.

Get Rocko the cutest dog costume ever

If you don’t follow me on SnapChat or Snap Inc. I feel bad for you, you miss out on the Rocko snaps. To be honest, he is the majority of my snaps. He’s been featured in his dog hoodie and Buckeye jersey now, it’s Halloween time. I’m going to be super indecisive about it because that’s just me but I can’t wait to see what I finally decide on and if he keeps it on.

I feel like October through December is the season of giving — giving candy, giving thanks, giving love and celebration. Not that you shouldn’t volunteer year around but these last three months are the months I think it matters the most. Especially Thanksgiving and Christmas time. I definitely want to get out there and help out. Last year, I tried to work my time around NC4K but I couldn’t manage to get any free time but this year, I’m better at time management so I’m going to get to it.

This is more of a goal to plan in the future because Friendsgiving would be fun. Of course, you need a bundle of friends so you aren’t the only one cooking.

Quality time with my favorite people

Quality time is the best time. I spend every weekend with my family so I get a lot of quality time. I should disperse some of that to my friends but I need them to want to sit on a couch with tea and just chill. I’ll give you quality time soon, friends.

Make a trip to the Shoe on a Saturday

Proud Ohio State Alumna right here and I love being in the Shoe on a Saturday. It’s the best atmosphere in college football, don’t argue with me about it. I’ve been to other schools and their student sections and crowds just don’t compare. I love Ohio State Football and I’ll attempt to make it to a game this year but it’s getting cold and I feel like I’m better suited curled up with the game on — The Game is at the Shoe this year so maybe I’ll be there, watching us whomp on TTUN.

What do you have planned for Fall? What would you like to do?