Most don’t know unless you follow me on Twitter then you’ve
seen my ramblings but my childhood best friend is getting married. Next
September. It’s early but I’m excited and even more excited that she asked me
to be a bridesmaid. Lucky me, lucky bee. It’s a dream come true to be in a
wedding party especially her’s – no lie or sucking up. This will be the first
wedding party to keep me. Long story short, I was a bridesmaid for another girl
that I used to work with and she replaced me but didn’t tell me, she told my
younger sister instead who gave me the news. It’s whatever now but at the time,
I was upset and rightfully so since I had helped planned and provided her with
planning assets.

Anyways back to the exciting news and person I want to talk
about – Julia. The two of us grew up together from seventh grade until now so
this is really important to me. It’s a tough job and it’s barely even started. There
are seven of us in her wedding part and she wanted us all to agree on a dress
color and style. This was a tad bit hard because her first colors for the
wedding with a range of such pretty and sunset-y colors. Ultimately, J ended up
picking a color but her whole objective was for us all to look and find
something in our price range. She’s the type of person that won’t mess with
someone’s money and make him or her pay an outrageous amount for a dress –
she’s trying to keep this easy on us, which I know everyone appreciates.

Nonetheless, it’s a learning experience and it’s one that I
would not pass up. This is my own little bridesmaid babblings that I’ll ramble
on about and share throughout time, as we get closer to the wedding.

I think this was one thing that J has to learn through the
process. We have a group message since everything is in different states – J is
retired Navy. Our group message consisted of dresses that she had tried on as
her wedding dress and bridesmaid dresses that we would see floating around
online. Everyone has different body types and we needed something that would
accommodate everyone. Luckily, J came to Ohio one weekend and I was her dress
dummy – I tried on whatever she wanted and modeled them as she sent them to the
group message. At the end of the day, she picked the dress that SHE LIKED and
that was all that matters.

Like I stated earlier, we send everything in the group
message and discuss what we like and don’t like about certain dresses. It’s
been a learning process that you have to be honest with everyone about
everything. If you don’t like something, discuss what it is that you don’t
like. You’re forking over money for a dress that you’re going to be wearing all
day; you need to speak up when your opinion is wanted. Not only that you need
to touch base on whether your body will work wit the choices. Like I mentioned
above, J was very adamant on making sure that the dresses flattered everyone
and were comfortable for the group. She’s straight to the point and blunt so
she’ll let you know whether she likes it or not which is why we had to voice ourselves
but not talk over her.

You need to get along with the entire group for the bride’s
sake. I don’t think I’ve ever met a bridal party that is upset with someone or
dislikes a few people in the group. It’s unusual but I’m sure it happens.
Nonetheless, you need to get along with the group for the time being. You might
not be a fan of a person but you don’t have to nor do you need to voice it. To
be blunt, get over it for the moment. You probably don’t have to deal with this
person on a daily basis if you’re not a fan of them so just put up with them
for the bride’s sake. I’m part of a group that get’s along, thankfully but I
could only imagine the issues arising with parties that bump heads.

The one thing that you need to remember is to always be
available when your bride needs you. I’ve had Julia call me at work and I
immediately text that I’ll call as soon as I get off but I also tag on a
‘what’s up?’ as well so she can toss in anything that is urgent. I’ve learned to
be available whenever Julia calls – she FaceTimes me whenever she needs
something and I always find the time to answer. I’m also lucky enough to have a
chill schedule after work and that’s usually when she calls. As the days get
closer, I’m sure things will pile up and I’ll always need to have availability
to talk, which I don’t mind. I’m actually excited about it.

This is just the start. I’ve never been a bridesmaid but I’m
excited about it. Who wouldn’t be?! I can’t wait to bombard everyone with
pictures of the event. There’s a year until that time comes but I’m counting
down the days. Any tips on being a bridesmaid? Give me all the deets!

Creative Babes, let me tell you…
5 Shows You Should Be Netflixin’ This Fall 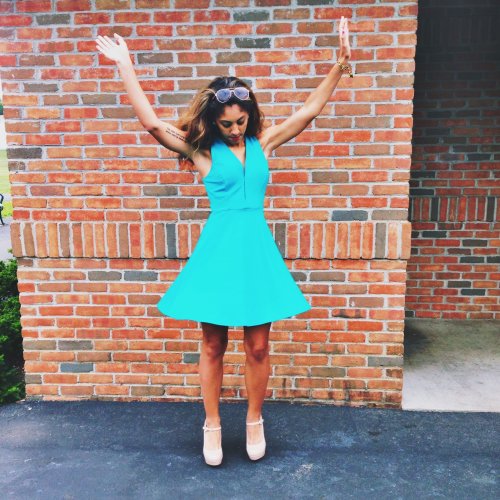 What To Wear To A Summer Wedding
4 Thoughts I Had About My New Role
Creative Babes, let me tell you…